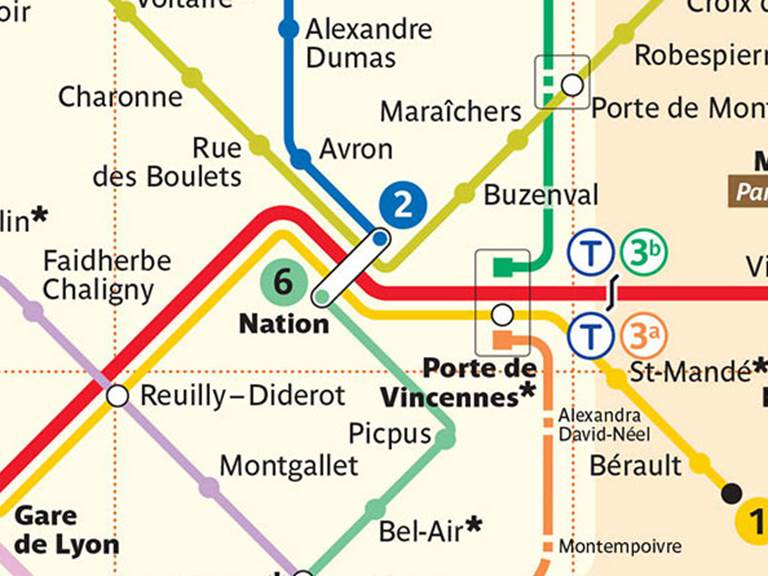 We are in the 12th arrondissement of Paris in the neighborhood of the Nation, it is a family district with small shops. We are on the Boulevard de Picpus, near the Gare de Lyon and Bercy, the Bastille and the Marais as well as the Bois de Vincennes.
This district, which may seem out of the way, is well served by several Metro, RER and Bus lines, which provide access to its main monuments, museums, theaters and railway stations in less than a quarter of an hour.


Metro line 1: It takes you directly to the Bastille, the Marais, the Louvre, the Tuileries, the Concorde, the Champs-Élysées and the Arc de Triomphe.
Metro line 2: Take you to the Père Lachaise cemetery, Belleville, Pigalle, Montmartre, and Place de l'Étoile.
Subway line 6:It gives access directly to Montparnasse and the Eiffel Tower, via Bercy and the 15th arrondissement.
BUS line 29: Stop in front of the house, pass in the Bastille, cross Paris to the Opera and Gare Saint-Lazare, the department stores of Printemps and Galeries Lafayette.
BUS line 56: Stop in front of the house, it goes towards Place de la République, Gare du Nord, Gare de l'Est, Barbès and the Flea Market at Porte de Clignancourt.
BUS line 86: Stop 3 minutes on foot, it passes Place de la Bastille, Île Saint-Louis, Île de la Cité and as far as Saint-Germain des Prés.

RER lines A and B
You drive to Roissy airport, as well as bus 351 (Place de la Nation stop).